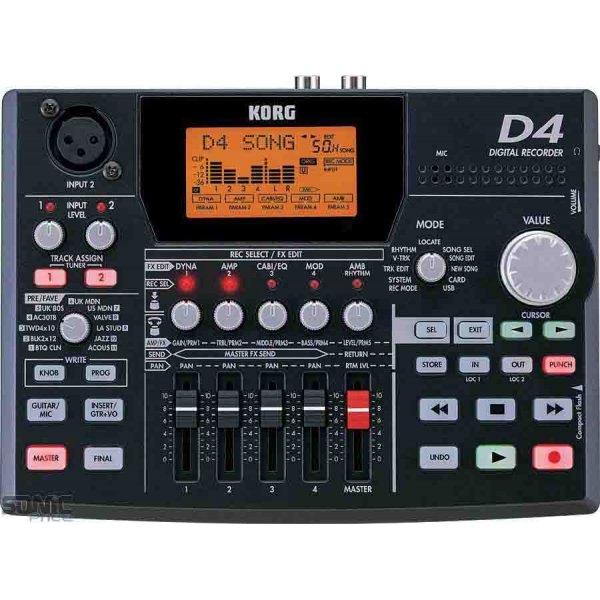 The BOSS BR-864 puts 8-track digital recording in the palm of your hand. Never has so much power been available in such a small package. With features like 64 Virtual Tracks, onboard COSM effects, Compact Flash media for recording and a built-in USB port, the BR-864 has everything guitarists and songwriters need to turn ideas into songs.

The BR-864 is not only BOSS' smallest 8-track recorder, but it's also our most affordable. With 64 Virtual Tracks, there's plenty of room to track multiple overdubs, vocals and instruments. A 128MB CompactFlash card comes standard, giving you over an hour's worth of high-quality recording time.

A built-in USB port makes it easy to import and export audio with USB-equipped computers. Now you can load and convert .WAV/AIFF files from your Mac or PC directly into a track, or export your song for CD-burning and MP3 creation. The USB port also makes for a great way to archive and backup recordings to your computer's hard drive.

A World of High-Quality Effects

Thanks to COSM modeling, guitarists can plug right into the BR-864 and get killer tone every time. Simply choose from several COSM Amp Models and you'll sound huge. There's even a Bass Simulator that lets you lay down bass from a guitar-plus several new effects like wah, guitar synth and a Harmonist for scale-intelligent pitch shifting.

The Rhythm Guide function has been beefed up considerably for the BR-864. First, BOSS added full programmability, meaning you can tap in your own drum patterns in addition to the dozens of great-sounding presets. A new Tone Load function lets you add custom drum sounds by importing .WAV/AIFF files. Best of all, the Rhythm Guide doesn't use any of the 64 recording tracks, so you still get eight playback tracks and drums.